How to Download Music from Spotify to Android Phones

Android is a mobile operating system being developed by Google. Among Android products, Android phones are very popular in the market. Most of the people prefer Android phones as they are easy to use and offer more choices - Compared to Apple enthusiasts, Android users have far more brands and models of phones to choose from at different price levels.

After years of development, many Android phones have also become ideal platforms to listen to music with. Currently most people would subscribe a streaming music service to enjoy music because that we will have access to all the songs in the vast music library with around $10 or even free. And among all the streaming music services, Spotify is the dominant one in the market, offering 35 million songs to about 170 million active users. 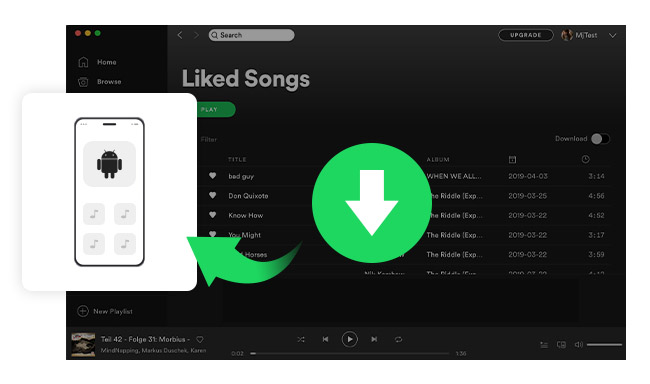 How can we stream Spotify songs on Android phones? To download the Spotify app and then play Spotify songs with the app seems to be the only way as we all know that Spotify offers DRM-protected songs only, which prevents us from listening to Spotify songs with other media players or downloading any songs from the platform to other devices for offline listening. BUT Things will change after you finish reading this article.

Here we are going to introduce a special way to download music from Spotify to Android phones so that you can listen to Spotify songs freely.

NoteBurner Spotify Music Converter supports both Windows and Mac OS. Here we will take Windows version as an example to guide you to download music from Spotify (Free) step by step. For Mac users, please refer to How to Download Music from Spotify Free for Offline Listening on Mac for detailed steps.

1 Add Spotify songs or playlists to the Program

After downloading and launching NoteBurner, click "+" button on the upper right and there will be a pop-up window prompting you to copy and paste or drag and drop the song / playlist link from Spotify (Free) to NoteBurner.

Click "Convert" button to start conversion. Once the conversion is finished, all the Spotify songs you selected in Step 1 will have already been converted and downloaded to the output folder you set in previous step.

By clicking the "Converted" button on the left side or directly going to the output folder you customized in Step 2, you can find all the downloaded songs from Spotify (Free).

Now you’ve got music downloaded from Spotify to your Android phone, you can listen to them offline with any media player whenever and wherever you like.

Would wonder how to get Netflix videos in MP4 format? Here you will be suggested a powerful program: Netflix Video Downloader. After download Netflix movies & TV shows at HD quality with it, you will be allowed to transfer all Netfilx videos to other devices or share them with friends with freedome. Learn More >>