How to Play Spotify Music on Fitbit

If you are seasoned Fitbit owners, you might have known it for a while that Spotify’s "Connect & Control" feature is available on Fitbit since the Versa 2. Currently, this wonderful Spotify music playback feature is supported by Fitbit Versa Family, Fitbit Ionic, and Fitbit Charge 4. If you don’t own any of these smartwatches, you’re out of luck.

Playing Spotify music on Fitbit requires a Spotify Premium account. However, of particular note is the Spotify app for Fitbit can only act as a remote, controlling the Spotify music playing on your phone. There is no offline playback support, so your Fitbit will always need to be connected to the web and near your smartphone to play your tracks. Below we'll be explaining how to download and use Spotify on Fitbit. What’ more, for Fitbit Versa, Versa 2, or Ionic owner, you can also refer to part 2 to get the way of downloading and transferring Spotify songs to Fitbit for offline playback without your phone nearby. Part 1: How to Set up Spotify on Fitbit

To listen to Spotify music on Fitbit, you’ll obviously need to have the Spotify app installed both on your phone and your Fitbit.

Step 1 Open your Fitbit mobile app and tap your avatar icon in the upper right corner to be taken to your profile.

Step 2 Tap the device you want to download Spotify onto, then select "Apps" > "All Apps", now scroll your way down to find Spotify and tap "Install". During the app installation, make sure to give all the permissions being asked. 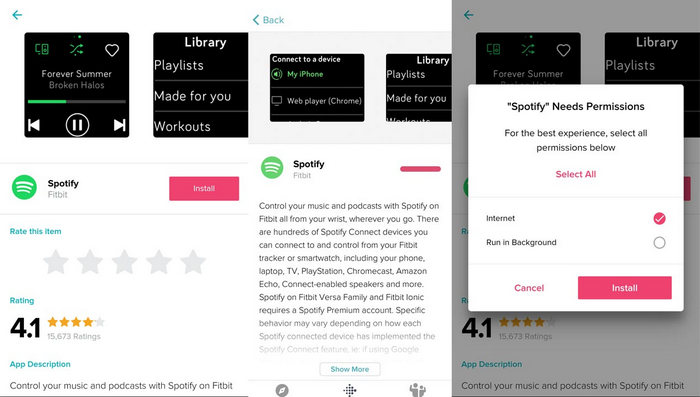 Step 3 After installation, you’ll see a Settings menu at the bottom of the Spotify app page on the Fitbit app. Select it and then follow the on-screen instructions to log in to your Spotify Premium account.

Afterward, your phone should confirm you have installed Spotify on your Fitbit. Now, you can sync your app to your watch and then tap on Spotify to start listening to your tunes.

Part 2: How to Play Spotify Songs Offline on Fitbit

As mentioned above, there is no offline Spotify support on Fitbit devices, so you're not going to be able to play music while you're away from your phone. And most of Fitbit smartwatches also lack the capability of onboard music storage. Thus, this way listed here only works on Fitbit Versa, Versa 2, and Ionic, featuring around 2.5 GB music storage.

To play Spotify music offline on Fitbit, the key step is to download Spotify songs as local files with the help of some music downloading tools. Here you are recommended to use NoteBurner Spotify Music Converter. It is an excellent Spotify music downloading and converting tool to record Spotify songs, playlists, podcasts and convert them to MP3, AAC, FLAC, AIFF, WAV, or ALAC with 100% original quality and all ID3 tags kept. With its help, you can download Spotify songs as local files and sync to Fitbit devices with ease.

Tutorial: How to Download Spotify Music in MP3 and Transfer to Fitbit

The following is a detailed tutorial about how to download Spotify songs to MP3 files and move them to Fitbit with NoteBurner Spotify Music Converter for Windows. Please download this useful tool on your computer first before getting started.

Launch NoteBurner and simply drag and drop your playlist from Spotify to NoteBurner. The program will list all songs in the Add window. Please select all songs you'll need and click OK.

When finish customization, click "Convert" to start downloading. The songs will be all saved to the output path.

By clicking the Converted tab (like a clock) or directly going to the output folder you customized in Step 3, you can find all the converted Spotify songs in MP3 format.

Simply connect your Fitbit smartwatches to your computer or your mobile via Wi-Fi and use the Fitbit Connect app to transfer the converted Spotify Music to Fitbit to enjoy without needing your phone nearby.

For more info, please go to: How to transfer music to your Fitbit.

Playing Spotify music on Fitbit is now not a dream. You can not only install and set up the Spotify app on your Fitbit devices, but also download and transfer local Spotify songs to Fitbit for offline streaming. To play Spotify music offline on Fitbit, a truly efficient Spotify music downloading tool is required, of course. NoteBurner Spotify Music Converter is the one not to be missed.

And it provides the free trial version that allows you to convert the first 3 minutes of each song. You can buy the full version to unlock this limitation and enable all its features. And it is suggested to download the trial version and test if it meets your needs for Spotify music converting.

YouTube Video: How to Use NoteBurner Spotify Music Converter