How to Move Spotify Playlist to Apple Music

Digital music services are now firmly embedded into our way of life, such as Spotify, Apple Music, and Google Play Music, providing access to millions of songs, albums and live performances. Launched in October 2008, Spotify is one of the most popular music platform with 345 million monthly active users and 155 million paying subscribers. However, thing has changed since Apple Inc. launched Apple Music on June 8, 2015. As of September 2021, Apple Music has more than 72 million paying subscribers. There are many people switch from Spotify to Apple Music, especially those with an iPhone.

It’s easy to change the music streaming service from Spotify Music to another, but how do you move your favorite Spotify playlist to Apple Music? A lot of people are bothered by the problem, regardless of the Spotify Free users, or Premium or Family users. 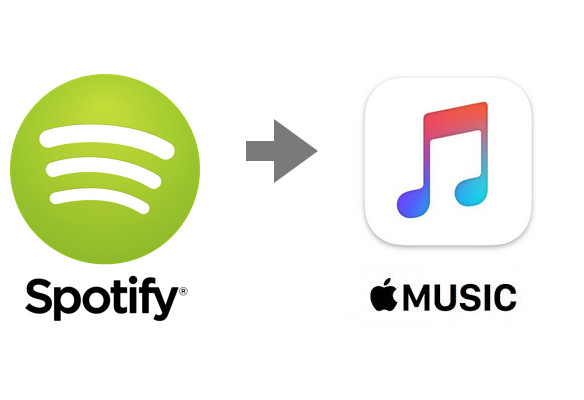 Part 1: How to Transfer Spotify Playlist to Apple Music

Launch NoteBurner Music converter for Mac and Spotify application would be opened automatically with it. Click "+" button on the top-left interface, and then drag or drop the audios you would like to switch from Spotify to NoteBurner Spotify Music Converter, and click "OK".

Click the setting button on the top-right interface to set output format, output quality, conversion speed and output path. You can convert Spotify music to MP3, AAC, FLAC, AIFF, WAV, or ALAC with high quality (320 kbps is available to choose).

4 Convert Spotify Playlist for Offline Use

After the above setting, click the "Convert" button to start converting Spotify music. After converting, the DRM restriction is removed from Spotify tracks, the converted music are DRM free, you can transfer them freely to Apple Music for streaming.

Part 2: How to Import Converted Spotify Playlist to Apple Music

Step 1 Go into the iTunes Menu using the desktop client. Click the icon in the top right corner, and choose the “Add to Library” option from the drop-down menu. Step 2 Find the converted playlist you want to add from your computer, and add it into iTunes for enjoying.