Hey guys, is anyone running across the compatibility issue of Apple Music with Google Pixel? I can't download it from the Play Store, because it says it isn't compatible. It used to work...but then it kept crashing so I uninstalled and went to redl - where I've now come across this problem, been happening for maybe a week now. BUMMER.

Apple Music provides access to millions of songs for us. However, because of their protection, we are limited to listen to Apple Music on iTunes or with Apple Music App. When downloading Apple Music on your device, you may also encounter the same problem as the lead-in question proposed by a Reddit mate. On one hand, the device may not support Apple Music App; on the other hand, Apple Music App may crash and freeze for some reason, which costs you a lot of time but with no solution in the end. This tutorial is going to show you the best way to stream and enjoy Apple Music on Google Pixel 2 / 2XL without Apple Music App. 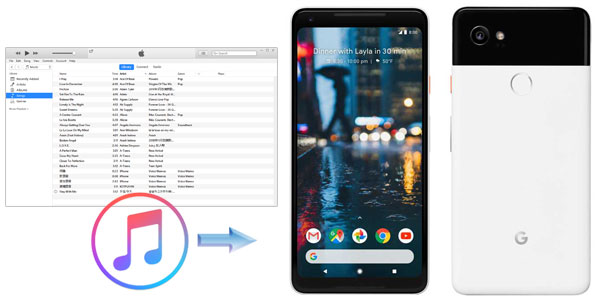 As mentioned above, it’s their music protection from Apple Music that confines us to listen to the songs with its’ App. Therefore, to enjoy Apple Music without Apple Music App, it's essential for us to convert Apple Music, for which choosing a superior Apple Music Converter is crucial to the whole process. By comparison, here we are going to guide you on how to transfer Apple Music to Google Pixel 2 / 2 XL with the flagship product under the famous brand of NoteBurner – NoteBurner iTunes Audio Converter.

NoteBurner is well-acknowledged for its’ expertise in recording Apple Music, Audiobooks, iTunes M4V Movies and etc. NoteBurner iTunes Audio Converter is a combination of Apple Music Converter, Audiobook Converter and iTunes M4P Converter. For years, its’ timely technical support and prompt customer service have won quite a number of NoteBurner fans and its’ customer base is still on the rise.

The following is a detailed tutorial to guide you to stream Apple Music to Google Pixel 2 / 2XL with the program. Before we get started, please download NoteBurner iTunes Audio Converter, which supports the latest version of both Windows & Mac OS, according to your operating system.

How to Stream Apple Music to Google Pixel 2 / 2 XL

Click the button "convert", and all the Apple Music you chose in Step 2 will soon be converted to the format you selected in Step 3 and downloaded & streamed to the output folder you customized in previous step.

Step 5: Find the Converted Apple Music and Transfer them to Google Pixel 2 / 2 XL

Click the history button on the upper right. Here you can find all the converted songs. Of course, you can also directly go to the output folder you selected in Step 3 to find the converted Apple Music.

Now just connect your Google Pixel 2 / 2 XL to your computer and transfer the songs to it.