How to Add Apple Music to Camtasia Video

Music plays an important role in enriching videos. It can add tension to a dramatic scene, or become the iconic sound of your brand. So if you want to make your video more attractive, it is no doubt that adding music to it would be the best way. However, adding music to video is not as easy as expected, especially for some Apple Music users. As they find that all efforts to import Apple Music track to Camtasia for video editing have failed. Why? Because all of Apple Music songs are not allowed to take them outside of Apple Music or iTunes app. That means you can’t add Apple Music to Camtasia video. It’s somehow quite annoying for those users who have already paid for Apple Music. But don’t be upset, please read on the following guide which will show you an easy way to import any Apple Music song to Camtasia video.

Here you meet NoteBurner iTunes Audio Converter is a smart yet easy-to-use Apple Music Converter for Apple Music users, which is specially developed to help users convert the Apple songs from M4P to MP3, FLAC, AAC, AIFF, WAV, or ALAC format at 10X speed. Besides, it is capable of downloading Apple Music tracks without damaging the original streaming audio quality. With the help of this powerful tool, you can easily add the downloaded Apple Music songs to Camtasia for making video project.

Tutorial: How to Import Apple Music to Camtasia

The following is the detailed tutorial to guide you to convert Apple Music to MP3 and import to Camtasia. Please download NoteBurner Apple Music Converter first before getting started.

Open Camtasia and select File from the menu, and select Library >> Import Media to Library from the popup window to import converted Apple Music songs to it. Once the file is imported, you can find it in the media bin, then drag it to the timeline and edit as background music. 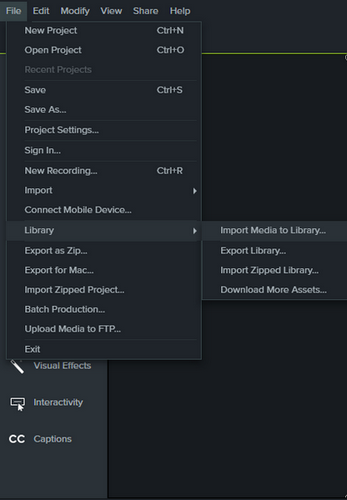