Advantages & Disadvantages of Apple Music: Is It Worth Subscribing? 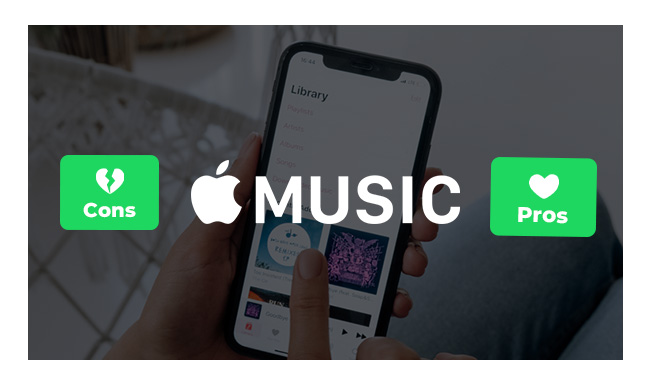 What is Apple Music?

What is Apple Music? To quota what Apple's CEO Tim Cook said, "All the ways you love music. All in one place." Simply speaking, Apple Music is a music streaming service that offers you huge catalogs to let you enjoying music more freely and conveniently. It is the combination of three distinct things – Apple Music, Apple Music Radio and Apple Music Connect.

The five-year-old Apple Music has gained much popularity. There must be something that lets people choose Apple Music. Following, the main advantages of Apple Music will be listed.

1. Price and Availability: Everyone gets a 1-month free trial to give Apple Music a shot. After 3 months, $10 a month is needed to use Apple Music. This doesn't sound very appealing. But the $14.99 family plan which allows up to six accounts aggressively courts parents. And, this time Apple is smart to be making Apple Music available not only on iOS, Mac, and Apple Watch but on Android phones and Windows PCs. The Apple Music is available in 167 countries.

2. Huge Music Catalog yet Easy Music Discovering: There are over 90 million songs in Apple Music catalog. You can find almost all music you want in Apple Music. With such a sum of songs, many people would wonder how to find the one they want. Don’t worry, the "For You" section of the app gets to know your preferences and generates recommendations from experts who know and love music based on what you normally listen to.

3. Offline Listening: Paid Apple Music users will have access to download albums and songs they like for offline listening. This helps much to listen to music without an internet connection on the road. Enjoying music on a flight or a trip seems easy to realize. 4. Beats 1 Radio: Apple Music allows users tune into Beats 1, an exclusive, 24-7, human-run global radio station broadcasting to 100 countries, which helps those who don't know what to search for and listen to discover artists they can then stream at their leisure.

5. Connect between Musicians and Fans: Apple includes a tab inside Apple Music, named Connect, where artists can share a feed of lyrics, music, photos, videos, and text posts with their fans. It is designed to consolidate and develop the relationship between musicians and fans.

2. Protected Songs: Apple Music has locked all your downloaded songs with Apple FairPlay Protection, which makes it inconvenient to enjoy these songs. You cannot keep your downloaded songs if you canceling the subscription. Also, you are not able to play the music on devices without Apple ID signed in.

Apple Music is an adequate music streaming service. The product isn’t much better or worse than its competitors. On this premise, if Apple Music offers a free tier and standout product innovations, it could leapfrog Spotify, Pandora and Tidal, etc.

♥ Get Better Apple Music in the future: While the 2015 launch of Apple Music was marred by a clunky UI and any number of usability issues, Apple’s music streaming service has improved considerably since then. Better recommendations, more personalized playlists, nicer Crossfade and so on, all these improvements contribute a great share in the rapid growth of Apple Music subscribers.