"Songs Of Experience" is an upcoming fourteenth studio album by Irish rock band U2. It is intended to be a companion release to 2014’s "Songs of Innocence". The album is scheduled to released on December 1, 2017, via Island Records. But on 6 September 2017, U2 released the album's first single, "You're the Best Thing About Me" to promote the album, the band will embark on the Experience + Innocence Tour in 2018.

With an official "Songs Of Experience" announcement expected any day now, it's no secret what songs will be included on U2's next album. Bono and the band have revealed more than a dozen titles already, "The Blackout", "Get Out of Your Own Way", "American Soul", released the album's artwork -- a young boy and girl stoically holding hands in black and white, and even shared a few details about the running order. 1. Love Is All We Have Left

3. You're The Best Thing About Med

9. The Little Things That Give You Away

12. Love Is Bigger Than Anything In Its Way

For some fans of U2, you may prefer to enjoy these hottest music on your portable MP3 player or stream them in your car. However, although Apple Music allows subscribers freely download and save the music and albums offline onto devices linked to Apple Music account, it restricts the use of the music files on other devices by adding a DRM protection to streaming music collection on Apple Music. What's worse, when the subscription ends, the DRM-locked songs will be disabled and inoperable.

So if you want to download U2’s "Songs of Experience" to MP3 for streaming on your portable MP3 player, you'll need a third-party iTunes DRM removal tool. Here we are talking about NoteBurner iTunes Audio Converter which is a professional Apple Music Converter to help you record Apple Music songs and playlists and convert Apple Music files, audiobooks, or other downloaded music from iTunes or Apple Music to MP3, AAC, FLAC, AIFF, WAV, or ALAC format at 10X faster speed with keeping lossless audio quality. Thus, you are able to take full control over the downloaded tracks of "Songs of Experience" and freely play the music back on any media player or burn the songs to CDs, even if the subscription ends. 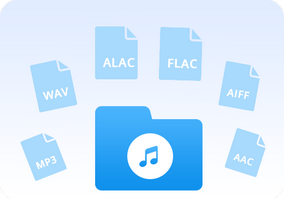 After completing the above steps, the final one is clicking the button "Convert". Just a few second, it will succeed. After converting, the output folder will be open automatically. Or you can click the History button on the top-right interface to find the converted music. Now all of the songs from Apple Music are free from DRM, you can sync them to any of your devices for enjoying.